Long before there was the Occupational Safety and Health Administration (OSHA), Ohio had the Division of Safety & Hygiene.

Nearly 100 years ago, the Ohio General Assembly gave the Industrial Commission of Ohio the green light to create an agency (commonly known as the Division of Safety & Hygiene) for the prevention of workplace accidents and diseases.

To promote safety awareness and education, the division began designing bulletin board posters for employers to display in factories and workplaces throughout Ohio. Many of these posters ended up in the archives of the BWC Library.

Recently, the BWC Library teamed up with Ohio Memory – the statewide digital library program run by the Ohio History Connection and State Library of Ohio – to create an online archive of the posters.

Getting hundreds of posters online

We worked closely with Ohio Memory to digitize nearly 500 posters from the 1920s through the early 2000s. The digital archive provides an enlightening and often entertaining glimpse at the workplace safety and health concerns of different eras.

In the 1940s, working safely meant keeping the factories running efficiently to supply and support the soldiers of World War II. An untreated cut which leads to infection and eventually death was a regular theme until the late 1970s. 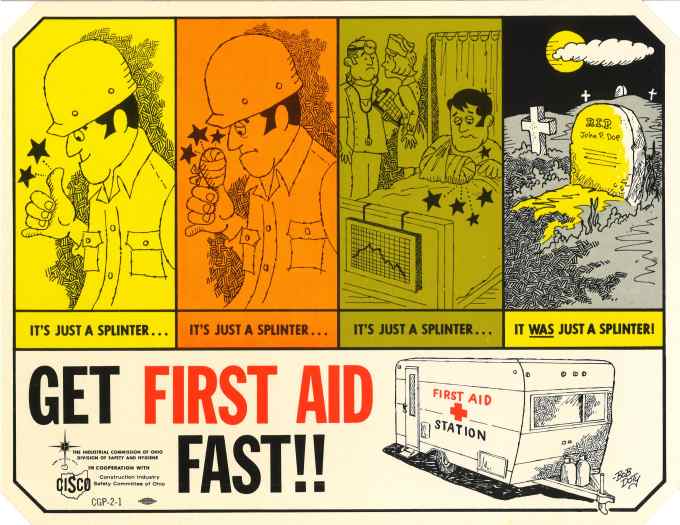 It’s interesting to see how many safety hazards that affected workers of the past are still all too common today. Falls from heights continue to be one of OSHA’s most frequently cited standards, and slips, trips and falls claims remain the most common for any industry. It’s no surprise then that many posters highlight the dangers of falls.

The archive also shows the evolving design trends through the decades as well as the artists’ individual styles. In the 1950s, the bright red and yellow of the new Day-Glo printing caught the eye. The 1970s brought trippy, Monty Python-esque illustrations, such as a poster where a giant hand replaces a person’s head and a glove floats in the sky to promote hand protection. Even the division’s mining engineer, Jay W. Greaves, got in on the action, drawing many cartoons for the agency throughout his career, his signature mouse offering cheeky comments on the edges of a scene.

Some posters have traveled throughout the U.S. and even around the globe. We have tracked down posters for the collection from Pennsylvania and California.

An early article in the division’s bulletin, The Ohio Monitor, claims it sent them as far away as India. It’s possible many posters may still be up in Ohio businesses today since many of the themes and graphics still resonate with workers.

As we digitize and upload more of our archive to Ohio Memory, BWC’s history will be easily accessible for the public to explore. So be sure to look for future collections from the BWC Library on Ohio Memory!