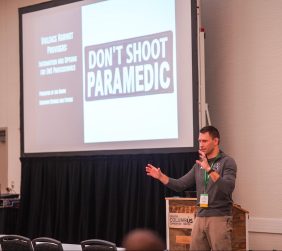 Firefighters and paramedics are in the business of saving lives, but few are prepared to save their own when they encounter hostile situations on the job, a firefighter/paramedic and self-defense coach told an audience Friday morning at the Ohio Safety Congress & Expo at the Greater Columbus Convention Center.

“There’s a huge problem and we need to start coming up with solutions to do something about it,” Jon Grabo told a gathering of Ohio EMS personnel during an educational session entitled, Violence Against Providers: Information and Options for EMS Professionals.

Grabo pointed to federal CDC statistics noting 2,600 EMS personnel received hospital treatment in 2014 due to on-the-job violence. He added that EMS workers are 10 times more likely to be assaulted than the general population.

“Every run has the potential to turn violent,” the nine-year veteran of the Grandview Heights Fire Department said. “And it’s not just from the drunks, the domestic violence calls, the overdoses … It’s anytime, anyplace, from anyone.”

In his 1-hour presentation, Grabo showed videos of real-world violence against EMS personnel, discussed how to recognize a potentially violent situation and offered some options for dealing with it.

He made a strong case for EMS workers to stay physically fit. “Fitness may be the deciding factor in preventing injuries,” he said. “Fitness matters, it always matters.” And he made a stronger case for self-defense training that involves fighting back, not just deflecting blows. “Someone swings at me with a knife and I’m not supposed to take him down?”

The best and first option should be to escape the scene, put some distance between yourself and the threat, he said. Others include reason and talking. Force should always be the last option and should never be punitive, he said. “It is a means for stopping an attack or allowing for escape.”

Asked about his own hostile encounters on the job, Grabo replied, “I’ve been threatened, I’ve been challenged and everything, but I am really good at talking to people. I’ve never had to go hands on.”

2 thoughts on “Violence against EMS workers a real threat”