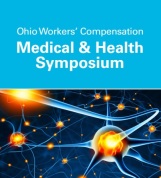 Americans are living longer and they’re working longer, which presents a particular set of health care challenges for the injured worker, as well as economic challenges for the workers’ compensation industry, a longtime nurse and work comp veteran said Thursday morning at the 2017 Ohio Workers’ Compensation Medical & Health Symposium.

“Many of us don’t want to retire or we can’t retire, and that’s changing how we look at individuals in the workforce before they have an injury and how we manage their care after an injury,” said Kevin T. Glennon, vice president of clinical services for One Call Care Management in Jacksonville, Florida.

Glennon, speaking to a capacity audience at the Greater Columbus Convention Center, spoke for roughly 50 minutes on the topic, “Managing the Changing Needs of the Aging Injured Worker.” The session was one of 13 continuing education classes offered at the two-day symposium for health care professionals. The symposium continues Friday in conjunction with the 2017 Ohio Safety Congress & Expo, the Ohio Bureau of Workers’ Compensation annual safety, health and workers’ compensation conference.

Glennon pointed to U.S. Bureau of Labor Statistics indicating that older workers are less likely to get injured on the job, but when they do, it’s almost always worse than when a younger person is injured.

While applauding people who want to work past the typical retirement age, Glennon noted the risks for doing so. Older workers typically have decreasing strength, endurance and reflexes, as well as diminished vision, hearing and mental acuity. And when injured, their recovery might be compromised by other existing health problems, such as diabetes, as well as medications that are contraindicated and an increasing susceptibility to infectious diseases.

The list goes on. All of which becomes even more complicated and costly if injured, aging workers have no family at home to help with their recovery.

Glennon told the audience to be proactive in managing work comp cases involving the elderly, even for cases where the worker was injured decades ago.

“I have one patient who is 80 who was injured at 22,” he said. “I’m a firm believer that when you have these older injuries, check up on these patients at least once a year.”

In any case involving the elderly, Glennon said to make sure the patient’s needs are being met, that they’re receiving proper vaccinations and routine medical checkups. Look for red flags —untreated wounds, recent ER visits — that could lead to a downward spiral of health problems. “And whatever we can do to keep the respiratory system healthy is money well spent,” he said.

Glennon added that technology, while expensive, can be more cost effective in the long run for the aging patient. Self-operated lifts to help the patient get out of bed, for example, or a wheelchair that helps a patient stand upright is likely cheaper than the costs of a home health aide over months and years.

As he wrapped up his presentation, Glennon said the aging workforce has caused employers to adjust their approach to risk management and workplace health and safety. Today the focus is on wellness and prevention — smoking cessation and weight management, for example — as well as modifying job tasks to better suit the worker.